We snuck a peek inside the upstairs area of the former 24-Hour Fitness WeHo construction site, which may or may not be the future home of a John Reed Fitness center. It appears the upstairs open space we’re all familiar with will no longer be so open. Photos show the main workout floor is being divided into separate rooms, or possible workout areas.
We continue to hear rumors that John Reed intends to pull out of opening at 8612 Santa Monica Boulevard. New intel by three separate sources say what others have been saying that the space may not live up to John Reed Fitness standards. The main issue is that they can’t get the pool area with retractable ceiling built to their liking. One source added that a Golds Gym is being considered for the space.
However, a construction worker this week reiterated what we were told by a contractor last month, which is that John Reed is still moving into the space as planned.
Here’s a sneak peek at what’s happening inside the upstairs construction site of the former 24-hour Fitness Super Sport #weho. It appears the open gym floor space is being split into sections. #wehotimes #wehocity #westhollywood #wehonews pic.twitter.com/0Cv6lrJw66
— WEHO TIMES (@WEHO_TIMES) May 26, 2022

When asked about issues with a retractable ceiling at the pool area, the construction worker said he didn’t know anything about what’s happening at the pool.
John Reed Fitness gyms (JOHN REED Fitness Music Club, JOHN REED Women’s Club, JOHN & JANE’S, THE REED) are run by RSG Group. RSG also runs Golds Gym and the high-end Heimat fitness center taking over the 1930s industrial factory building located next to CEMEX Hollywood Concrete Plant at 1000 N. La Brea Avenue.
A source at Golds Gym Hollywood said that location is not affiliated with RSG Group, so any intel coming from that location may not be true.
Construction is underway downstairs as well as can be seen by photos taken last month of the entire lobby area and aerobics rooms being gutted to make way for a whole new gym on the corner of Santa Monica Boulevard and Westbourne Drive. 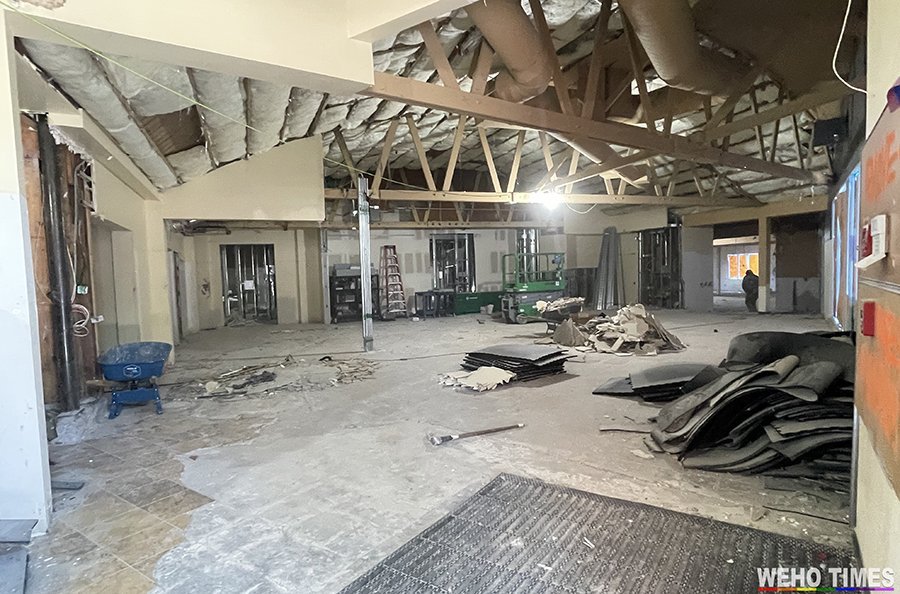 The WeHo 24-Hour Fitness gym officially closed on Tuesday, November 30, 2021 at exactly 9:00 p.m. Wehoans woke up to a different West Hollywood the morning after. The gym’s closure has changed the ecosystem of gyms in the surrounding area. The opening of a new John Reed gym at that location may be the answer for many who are finding local gyms like Crunch Fitness and Golds Gym too crowded for comfort. Other community members may find it too expensive.
The 24-Hour Fitness Super Sport Hollywood at 6380 Sunset Blvd (formerly known as the Arclight location, now The Dome Entertainment Center) reopened its doors last month after announcing it had closed permanently in 2020.
A contractor told WEHO TIMES last month that John Reed is opening its WeHo gym in roughly ten months.
More will be revealed.
Stop posting lies.